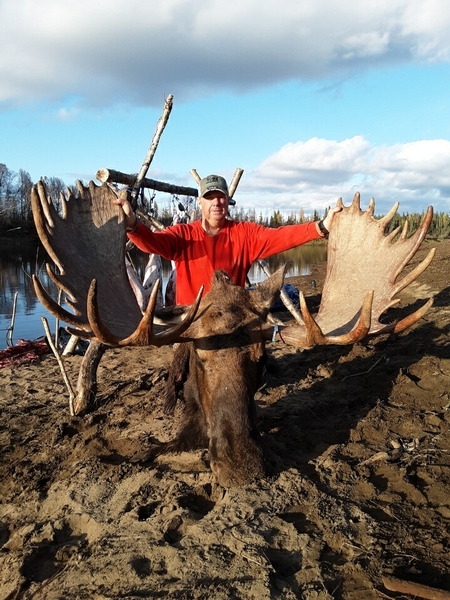 We had the best moose hunting season ever with success over 75%. After a record year in 2016, followed by an even better year in 2017, I did not think it could be any better but 2019 ended up being our best year ever. It started out slow with very warm weather and even though it stayed warm thru the entire season we had very little rain and the hunting was great. We had such great weather that only one group was a day late getting in and they tagged out and came out a day early. Every other group either went in on time or early.  Every group got out on time or earlier if they tagged out. If we have a cool season next year I can only imagine how great the hunting season will be. Our self -guided hunters had an actual kill rate of 75%. Our guided clients were 100% on 60 plus inch bulls. It just does not get any better than that. We are also seeing a large number of young bulls which means we have a very healthy population. Moose numbers have been steadily increasing for the past ten years in our area. For the fifteen years prior to that, we had seen a steady decrease in moose numbers which led to the season for non-residents being shortened from Sept. 5-25 to Sept. 5-20. In 2014, the season was reinstated to Sept. 5-25 for non-residents due to a much higher moose population. Once more we had several repeat hunters that passed up on bulls looking for a monster and we had groups of 2 hunters that only wanted one moose. We also limit the number of hunters we take to keep the harvest down. We hunt the Innoko Wildlife Refuge in western Alaska?and a huge part of the state land adjoining the refuge. This country is extremely remote and there is no better moose country anywhere. With the population on the increase it is a great time to plan a moose hunt. Due to our high success rate and repeat customers we book up fast, so you should plan your hunt two years in advance.