2017: Our Best Moose Hunting Season Ever 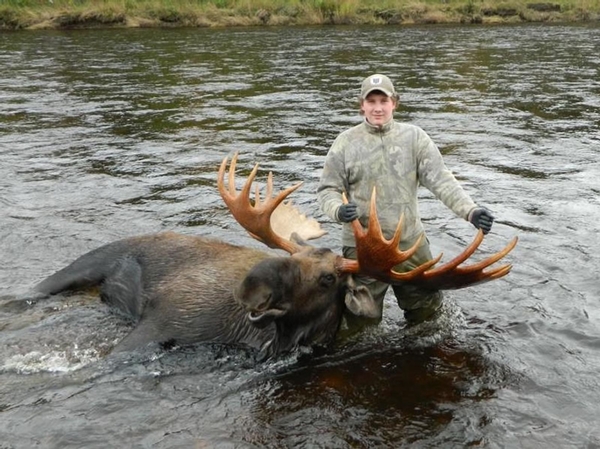 We had our best moose season ever in September 2017 with a success rate over 80%. We harvested 36 bull moose which was only five bulls less than we harvested in 2016, but we cut back on hunters in 2017 and had 15 fewer hunters. Our best year ever had been 2016, but 2017 topped it in hunter success. Once more we had several repeat hunters that passed up on bulls looking for a monster and we had groups of 2 hunters that only wanted one moose. We had 8 groups that were 100% and one of those groups was a group of 4 hunters. That is a huge undertaking for 4 hunters to harvest, butcher and pack out 4 moose. The hunting was good early again for the third year in a row, but remaining good throughout the season. We had a lot of rain and high water which makes hunting tough, but still had the best season ever. That shows how high our moose population is now. If we get a normal weather season, it’s hard to tell how high our success would have been. This shows how strong the moose population is in our area. Due to the high water almost all our floats were 100% because they start in the high country. We are also seeing a large number of young bulls which means we have a very healthy population. Moose numbers have been steadily increasing for the past eight years in our area. If a trophy moose is on your bucket list now is the time to book a hunt. I have been hunting this area since 1989 and it is the best moose hunting I have ever seen.

0 Comments on 2017: Our Best Moose Hunting Season Ever